AmpleSound are a VSTi manufacturer who specialise in sampling an array of popular stringed instruments including electric guitars, acoustic guitars, electric basses and upright basses. They also sell an array of DLC like extension libraries that add different features to these instruments such as being able to use another pick-up or adding a plectrum play style to a bass guitar.

Prices for these instruments and their expansions can be found here.

As a bass player, I was immediately drawn to the ABP (Ample Bass Precision) and was delighted when I found that there was a lite version that was available for free!

GUI
Keeping in line with the rest of their products, the ABP 2 lite is visually stunning. It looks current and the essential controls are exactly where you would expect them to be for quick access.

The only thing that I found a bit odd is that the volume control is located on the bass guitar rather than down with the other controls.

Other than that it is a joy to work with and one of my favourite features would be that markers are displayed relatively on both the keyboard and fretboard when you press on either one of them. This makes it extremely easy to transcribe keyboard parts to bass parts and vice-versa.

The first thing that I noticed about the ABP 2 lite is how well recorded it is. The bass that they have samples has an aggressive classic mid-range growl with rounded lows and shiny highs. Straight out of the box, the highs were a little too bright for my liking so I cut them out using a 1-band equaliser.

To demonstrate the realism of this instrument, I decided to conduct an A/B comparison between the ABP 2 and my own early 80's AriaPro II Columbus Series Bass. The bass was run directly into my Digi002 rack and then through Waves' GTR amp simulator and ProTools native vintage compressor, Bomb Factory. Although it isn't an actual p-bass it does share the same central split-coil pickup type shouldn't be too dissimilar in terms of tonality.

In order to keep this as fair of a comparison as possible, the same settings, plug-ins and bass line were used to ensure that this is truly a comparison between the real bass and the ABP. 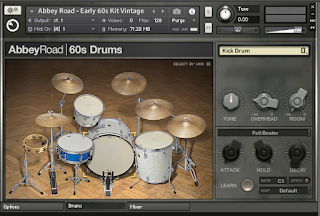 The bassline used it taken from Chic's good times. A drum track was also added using Native Instrument's Abbey Road 60's session drummer (This came as part of the Komplete Elements pack that I purchased a few years ago, which is definetely worth a purchase). I decided to record the real bass line first so that I could edit note durations to match up identically on the programmed parts to ensure that it is as realistically played as possible (velocity was also taken into consideration).

The ABP Lite 2 easily matches up to the real bass guitar and I would definitely consider it as a replacement if I was unable to record a real bass guitar. In terms of tonality, the ABP has a vast sample bank and a great response to velocity/note lengths. However, it can be time-consuming to get ANY sample based VSTi to sound realistic due to things like editing individual note lengths and velocities. To help you achieve a realistic result there are a bunch of left/right-hand taps, pops and string mute sounds higher up on the keyboard register and if you place these in the right place they can make all the difference.

Let me know your thoughts

Popular posts from this blog

April 03, 2017
Togu Audio Line
TAL have been a favourite plug-in producer of mine for a long while. They have a large variety of paid and free plug-ins available to download from their website -

This is a review of a free plug-in of theirs, the TAL-REVERB-4, which is a modulated vintage sounding reverb. After contacting Patrick Kunz of TAL, he state that it is the delay time that gets modulated in order to get the diffused sound. There are no controls to edit the modulation on this plug-in but the amount of modulation isn't very strong until you decide to push the size parameter.


GUI
The GUI on this plug-in features an on/off button, wet, dry, pre-delay, Size, low cut filter and high cut filter. It certainly isn't the flashiest looking plug-in in the world but its utilitarian looks make it easy to use and intuitive to navigate.

The wet/dry controls give this reverb the ability to be used both directly on a channel and on an AUX/FX send. However, please bear in mind th…
1 comment
Read more

March 31, 2017
My name is Andy and I’m a music technology teacher from Yorkshire. I hold a bachelor’s degree in Creative Sound Production and am currently studying to gain my PGCE qualification.